We will make every effort to make sure that the conference will meet your expectations. We have planned lectures by guest speakers from major research institutions and numerous parallel sessions with presenters from all around the world, so please expect to have your schedule full. At the same time however we would like to encourage you to take some time (come a few days earlier or leave later, if possible) to enjoy Poznan, its attractions and local cuisine or go to one of the other Polish cities (or Berlin), which are not that far away at all.

Poznan is the capital of Wielkopolska region (Greater Poland). The city is steeped in Polish tradition and history, as it belongs to the oldest ones in Poland. It was the country’s first capital (together with Gniezno) and has played important role for centuries. Badly damaged during World War II, it has been beautifully restored (especially Stary Rynek – the Old Market Square). Today, with the population slightly above 500 000, it is a vibrant cultural and educational center with wide range of historic attractions, museums, restaurants and bars.

→ Stary Rynek – one of the finest old market squares in Europe, situated on the foot of the ruins of the King’s Castle (Zamek Przemysła). What is worth seeing is the Town Hall in Renaissance style, beautifully renovated, with its unique attraction in a form of two goats (that became the symbol of Poznań), which appear directly under its roof everyday at noon. Another must-see spot is the Fara Church. It is one of the most beautiful baroque churches in Poland, famous also for its organs. Stary Rynek amazes not only with its architecture, but also with the number of restaurants, cafés and bars. Its definitely the heart of the city.

→ Święty Marcin and Półwiejska street – we encourage you to take a walk along these two streets. You will pass by the main buildings of Adam Mickiewicz University, Grand Theater and Castle (see CK Zamek below). Before entering Stary Rynek turn right to get to Półwiejska street, the main pedestrian area with numerous shops. The street starts with Stary Marych (a figure of a man with a bike – a character from an old radio broadcasts dedicated to Poznan and its residents) and leads directly to Stary Browar (see below).

→ Cathedral Island – is known as a spot on which Poznan was founded and where Poland adopted Christian baptism in 966. This is also where the first church (still existing Cathedral) was built. The Cathedral Island is located very close to Malta, an artificial lake with a number of attractions along its edges (like a ski slope or ice rink).

→ Cytadela Park – the biggest Park in Poznań, located in close proximity to Collegium Iuridicum Novum, where the conference will take place. It contains military cemeteries and remains of some fortifications. It is also the area where sculptures of famous Polish artist Magdalena Abakanowicz are on display.

In Poznan you will also find a great number of museums and exhibitions organized in less typical surrounding (more information on them, as well as on Poznan City Card and discounts it offers you can find here).

→ National Museum – one of the biggest museums in Poland, it has a rich collection of Polish painting (from the 16th century on), as well as some foreign collections and numismatic ones, Aleje Marcinkowskiego 9

→ Archaeological Museum – it has permanent collections devoted to: The Prehistory of Greater Poland, Life and Death in Ancient Egypt and The Archeology of Sudan, Wodna 27

→ Museum of Ethnography – situated in a former Masonic lodge in the middle of a beautiful park, among presented exhibitions are: Folk Art, Technical Culture, Ceramics, Textiles and Dress, Toys, Urban Culture, Grobla 25

→ Museum of Musical Instruments – one of few museums of this kind in Europe, it has a big number of folk instruments from Poland and abroad and a special exhibition devoted to Chopin and his stay in Greater Poland, Stary Rynek 45

Also the region of Greater Poland itself is worth visiting, as especially appealing may count the small towns surrounded by forests and lakes (for details check the website).

Poznan has a well-developed public transport system that consists of trams and buses. To be eligible to use them, you need to purchase a ticket. They can be bought in small grocery stores or in ticket machines located by the tram stops or in some trams and buses (they have with English interface). Remember to validate it after you enter the vehicle. To check the routes or schedules please use this website or download the app on your phone. The prices are as follows:

For getting a taxi we recommend you to use one of the following phone numbers:

Getting from the airport to the city center should not be a problem. You can either take a bus (L or 59) or taxi (the journey will take 15 minutes and cost around 20 złoty).

Poznan is situated within a zone with relatively cold winters and warm summers. While in winter snowfalls and temperatures below zero are common, in summer temperatures might often reach 30°C or more. For the conference light summer clothes should be enough, but be also prepared for possible thunderstorms that may occur sometimes in the evenings. And since better safe than sorry… check the weather forecast before coming.

Polish belongs to the subgroup of West Slavic languages and is closely related to Czech and Slovak. It is the second most widely spoken Slavic language (after Russian). Its alphabet is based on Latin script but has 9 additional letters (ą, ć, ę, ł, ń, ó, ś, ź, ż). What makes learning it into quite a challenge is the fact that Polish is an inflectional language, which means that there are 7 cases that define the usage of the noun in a sentence. Those who would like to give it a try anyway we encourage to take one of the on-line free courses (here orhere). Nevertheless, communication in English should not be a problem (especially with younger people as the study of a foreign language – usually English – is compulsory at Polish schools).

Most Poles eat a light breakfast in the morning (usually some sandwiches with tea or coffee), dinner at around 2 or 3pm, and supper at 6 or 7pm. A dinner usually consists of a soup, followed by a main course such as meat with vegetables (very often pickled ones).

Among popular dishes in Poland you may want to try are:

(And typically from Poznan:)

You may also want to use a chance to grab some of the cheap food-on-to-go options: drożdżówka (yeast cake with fruits or pudding),zapiekanka (baguette with mushrooms, cheese and some other toppings) or kebab. July will also be the perfect time to try fresh seasonal fruits and vegetables, which can be bought not only in the stores, but also in the markets or homemade ice cream which can be found in special little parlors.

The cheapest option are so called “milk bars” (polish: bar mleczny). They were invented by the communist authorities in order to offer cheap meals to workers at the companies without canteens. The name comes from the fact that the meals were usually based on diary and vegetables since the meat was rationed. Nowadays, in this unique surrounding you will meet people from all social classes – students, professors, businessmen, elderly, homeless.

Though Poland is a part of the European Union, we still use our own currency – zloty (you can also see the abbreviations zl, zł or PLN). It is near to impossible to use any other money to pay so be prepared either to use an ATM to withdraw your money (among acceptable cards are: Visa, Visa Electron, Mastercard, Maestro and some others. In case of any doubts or questions, please contact your bank before coming) or exchange the money in a bank or one of the exchange offices (please remember that they may be closed on Saturdays and Sundays). Just to give you some orientation: 1 EUR ≈ 4,2 PLN, 1 USD ≈ 3,8 PLN, 1 GBP ≈ 5,7 PLN. Please keep in mind that the exchange rates and transport prices may still change and are given here only to give you some idea about the expenses you might encounter while being in Poland.

For purchasing souvenirs you may want to swing by some of the shops or street stands located by Stary Rynek and Półwiejska (pedestrian area in the city centre). You can also visit one of numerous shopping malls, e.g.:

Each of the cities below is situated in close proximity to Poznan and can be reached conveniently by train or bus (e.g. polskibus) with one way ticket prices from 30 to 60 złoty.

→ Wrocław – 3 hours by train, city of many bridges, situated on the river Oder and on the foot of Sudeten Mountains, historical capital of Silesia, visit: the Old Town with Market Square, Town Hall, Market Hall and Royal Palace, Cathedral Island

→ Gdańsk – 3-4 hours by train, situated on the Baltic coast, strategic port within the Hanseatic League, city where the Solidarity movement under the leadership of Lech Wałęsa was born, visit: Royal Way with city gates, Long Lane and Long Market surrounded by buildings in historical style, Artus court, Zuraw Crane; you can also visit Sopot or Hel and enjoy your time at one of many beaches.

→ Kraków – 6-7 hours by train, situated at the foot of Carpathian Mountains, one of the oldest cities in Poland, for years leading center of Polish cultural and academic life, former capital of the country, visit: historic center, which consists of the Old Town, Kazimierz and Wawel Castle, you may also want to travel to Wieliczka salt mine or Auschwitz-Birkenau camp. 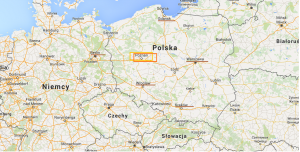