University of Glasgow and Noyam Institute for African Dance

The clock marks out
each second.

In the maximising conventions of the logics of neoliberal capitalism to measure output by resource input is the only way to use time. The modern-day labourer at the neoliberal screen, can measure exactly how long they have been in exile, from the times measured by the length of the breath, the weight of the world, the pattern of this waiting.

In all of this it is in the bodies of those seeking refuge where the deep resistances and at the same time the worst excesses of hyper-rationalisations to measures time, can be found. The wasted lives, the wasting bodies, the wasted time, the urgency of the now, of the fix and focus. The endless waiting for life as it is lived, weighted.

Be it integrating through learning languages in exactly 360 hours of classes or detailing precisely the dates and times of each trajectory in so-called refugee journey the neoliberal metrics persist in their power and their insistence of measured time, as evidence. For policy.

Forced Migration Scholarship and Forced Migration Policy then ‘make their object’ to follow Fabian’s ingenius critique (1983), by opposing it to the rhythms of bodies and seasons and phases of the moon. But whereas anthropology made it’s object using temporal categories such as ‘primitive’ and through attempts to deny the dimension of time as anything other than a measure in policy and much refugee research.

There is more way than one to measure time, to give time, to take time, to honour time and to waste time. The time economy persists alongside an economy of the gift.

To disrupt theory, time too must be disrupted. It’s felt experience unsmoothed, from the mild boredoms of bureaucratic order, the waiting rooms and clock up of hours, days, weeks, years. And the hierarchies of time which have privileged ‘chronos’ as the pinnacle and only way to delineated quality or event – number of citations, pages, footfall – may be deconstructed in such a way as to allow us to consider what time might be when considered a ‘waste’. Transformation occurs as time itself is qualitatively transformed, unsettled, experienced as flow, as gift.

In this paper the authors and actors will attempt to disrupt time through choreography and temporal play, rhythm and punctuation. This paper, will not be a paper, but rather an embodiment, live,  and standing as a direct critique of the dominant modes of counting what counts as time, well spent, the material access to such forms of time, and the hidden dimensions of what is available when time is wasted and an economy of the gift is found.

Alison Phipps is UNESCO Chair for Refugee Integration through Languages and the Arts at the University of Glasgow.

She is joined in the keynote by Dr Gameli Tordzro, Tawona Sitholé, Naa Densua Tordzro, artists in residence with the UNESCO RILA programme at the University of Glasgow. 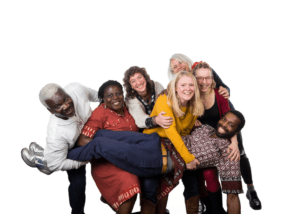